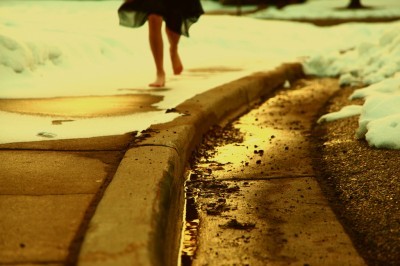 “People sometimes sneer at those who run every day, claiming they’ll go to any length to live longer. But don’t think that’s the reason most people run. Most runners run not because they want to live longer, but because they want to live life to the fullest. If you’re going to while away the years, it’s far better to live them with clear goals and fully alive than in a fog, and I believe running helps you to do that. Exerting yourself to the fullest within your individual limits: that’s the essence of running, and a metaphor for life — and for me, for writing as whole. I believe many runners would agree.”  ——Haruki Murakami

This quote appeared on my Facebook feed yesterday and it provided an instant flicker of reflection. I’ve talked about how my restless spirit interferes with my ability to live. The clarity sinks. I lose focus and the dominoes start to tumble in rapid succession. My irritation increases and I tend to focus on what isn’t happening, instead of appreciating the glory in breathing and living my days. I realize that a pressure cooker moment is barreling into my space and the urgency to seek calm takes precedence.

I know it is time. Slipping on my tennis shoes, I run down my driveway and hit the pavement. The first half-mile is difficult. I continue. As I run, I notice my lungs burning. Breathing through it, I pass a familiar site on my run, a park  where I see rabbits, flowers sprouting out of the cacti, and people taking their dogs for a morning walk. Taking a another deep breath, I hit another mile marker. When I curve my body against the turn, the running becomes a little easier. Several thoughts start spilling inside my brain. But emptying this metaphorical cup isn’t a distraction, but a release. Whatever churns inside rises like high tide, but then retreats into its place.

Earlier this year, I started skipping my runs for a multitude of reasons. Some of these reasons were legitimate, while others bordered on excuses. My restless energy strummed like an irregular heartbeat. My melancholy increased. The edges of sorrow became more prominent and my perceived difficulties moved toward the center. Brimming with anxiety, I decided that I needed to run again. It didn’t matter how many miles I completed, but I needed to just start.

When I ventured on my run after my hiatus, my feet moved slower, but I started looking around and the familiar sights comforted me. The school I always pass, the mountains, and the blue sky opened their arms and allowed me to become a part of their landscape again.

In this brief instant, I realized I discovered home again. For many years, my connection to home centered around geography and the people in my space. It is still one of the places I call home, but now the definition is expanding and evolving. Running is a place where it all fits. Isn’t that what home is all about?

IMAGE: RUN UNTIL YOU FLY BY D SHARON PRUITT VIA FLICKR UNDER A CREATIVE COMMONS LICENSE

Welcome! I am a lawyer turned freelance writer, essayist, and editor. On staff at Literary Mama and the co-founder and co-editor of the literary journal, The Sunlight Press, my essays and reported work have appeared in The Washington Post, The Lily, Saveur, Civil Eats, Brain, Child, ESPN and elsewhere. I am currently at work on a memoir on grief and culture and how it provides perspective on life’s ordinary graces. I invite you to appreciate the ordinary with me. I hope my daily practice of seeing the magic in the mundane helps you celebrate and find more of these moments in your life too. END_OF_DOCUMENT_TOKEN_TO_BE_REPLACED