For The First Time 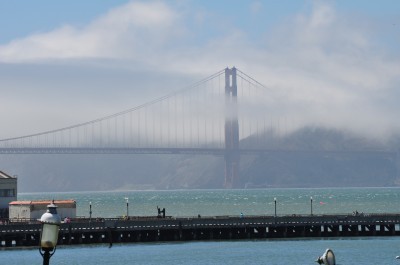 My husband, daughter and I spent the last week breathing in the sights of San Francisco. As a teenager I visited Lombard Street, Golden Gate Bridge, and Fisherman’s Wharf. Even though I carried these memories, it felt as if I was visiting these places and others for the very first time.

Travelling with my five year old daughter filled me with wonder. Everytime we encountered something new, she paused and started asking questions. The first questions came with the open air double decker bus. “Momma, we are riding that red bus? That looks like so much fun.” She held her hands up high in the air as we crossed over the Golden Gate Bridge. And as the wind blew our hair in different directions, her laughter made me pay close attention to the light blue sky, the ocean, and the ships sailing on the surface. I looked over to one side and succumbed to the vastness of the Pacific Ocean. The water, its dull glimmer and movemement carved a pocket of serenity within me. It is not something I can fully describe.

As we moved from one tourist attraction to another, we encountered many people on the streets. What gripped my daughter was a street drummer. She watched as the rhythm of the his sticks grazed his kind of drum, seven of them made out of various types of garbage cans. Fascinated that this wasn’t a traditional instrument, she asked if we could put money in the small jar where he stood. As soon as placed the dollar bills in the container, he acknowledged her by beating out a little ditty, and saying Thank You to her. She smiled and said to me immediately, “Momma he saw me and said Thank You.” This made me wonder about the different ways people seek validation. She acknowledged that his rhythm was cool and he made certain she knew it was appreciated.  And for a single moment I forgot that this man sought out revenue anyway he could, probably takings steps to avoid the terror of homelessness.

The final moment of wonder came as we stood in the middle of Muir Woods, where the average age of redwoods range from 400 -800 years. My daughter hugged the trunk of a tree, twisted, brown, the history reflected in the middle of each intertwining, and kept saying, “These trees are so tall.” It is a refrain she kept repeating over and over again. It made me look up again and take in the breadth of these trees and what they witnessed in the last 800 years. The magnitude of that is something I cannot understand. But it filled me up again, the awe of mother nature, and how it can soothe and sometimes terrify.

For the first time, my moments of wonder felt more palpable.  Sometimes you need to remind yourself to take a second look because it might mean you are seeing  and feeling for the first time.

Welcome! I am a lawyer turned freelance writer, essayist, and editor. On staff at Literary Mama and the co-founder and co-editor of the literary journal, The Sunlight Press, my essays and reported work have appeared in The Washington Post, The Lily, Saveur, Civil Eats, Brain, Child, ESPN and elsewhere. I am currently at work on a memoir on grief and culture and how it provides perspective on life’s ordinary graces. I invite you to appreciate the ordinary with me. I hope my daily practice of seeing the magic in the mundane helps you celebrate and find more of these moments in your life too. END_OF_DOCUMENT_TOKEN_TO_BE_REPLACED