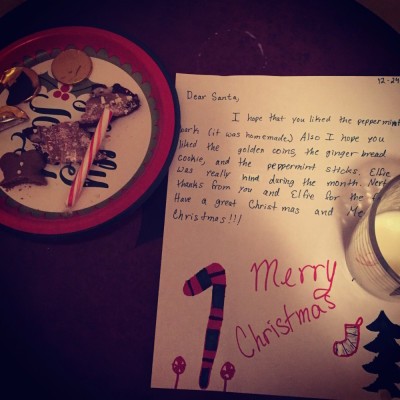 For the past few weeks, my daughter searches the house in the morning to determine the destination of her Elf on the Shelf. Even though she is on the verge of ten, she grabs her pink blanket, holds it tight and attempts to track down her friend. Once she finds him, there is an accompanying note, complimenting her on something she did during the week or encouraging her to do her best. She writes a letter in response, declaring her love of the Elf and how much she adores everything about him.

Yesterday she insisted on baking something sweet for the Elf (and Santa) and settled on making homemade peppermint bark. She read several recipes online, as well as the reviews, and then spent a few hours in the kitchen creating her concoction. I watched her measure, cut pieces of chocolate and smash peppermint candy for her bark. It’s beautiful to believe, isn’t it? This is the thought which kept unraveling in my head, as I witnessed her making and baking, humming tunes under her breath.

Evening announced its arrival and my daughter started assembling her bounty for Santa. She placed pieces of peppermint bark, a gingerbread cookie, gold coins and a candy cane on a festive plate. I encouraged her to handwrite her note, instead of printing it out on the computer – I convinced her that even Santa prefers the personal touch. Without protest, she pulled out her red and green markers and started penning her letter.

Taken aback by her faith and her willingness to surrender to her beliefs, I ponder the future and how her thinking will evolve over the course of the next few years. We are straddling the tentative time period between adolescence and the tween years. For now, though, I tuck her in, tiptoe into the garage and pull out each present one by one. Her father takes a big bite out of the peppermint bark, gulps the milk in two swallows and grabs her note. He makes a pit stop for the Elf and slips him into his pocket.

I smile as I survey the presents, the leftover peppermint bark and the thought of her racing toward the tree in the morning.

Happy Holidays to you and yours. May you believe as well. xo

Welcome! I am a lawyer turned freelance writer, essayist, and editor. On staff at Literary Mama and the co-founder and co-editor of the literary journal, The Sunlight Press, my essays and reported work have appeared in The Washington Post, The Lily, Saveur, Civil Eats, Brain, Child, ESPN and elsewhere. I am currently at work on a memoir on grief and culture and how it provides perspective on life’s ordinary graces. I invite you to appreciate the ordinary with me. I hope my daily practice of seeing the magic in the mundane helps you celebrate and find more of these moments in your life too. END_OF_DOCUMENT_TOKEN_TO_BE_REPLACED