Eight and a Half 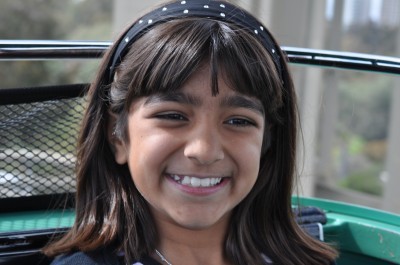 Today my daughter turns eight and a half.

I hesitated writing this piece because a part of me wants to deny that she is inching closer to double digits. She will likely be my only child and I mourn all of her milestones because they are her firsts, but my lasts. Perhaps my need to hold on shows up in ways I am only now recognizing. Her mahogany crib sits in the corner of our garage, along with the mattress, like two friends whispering about something they only know. In a cabinet, her car seat sleeps next to my Medela breast pump. Every time I start to clean my garage, I cannot bear to donate these items, convincing myself that these are keepsakes that my daughter may cherish in the future. Really, though, these are not her treasures, but are sacred tokens of my entry into motherhood.

When I became a mother, a torrent of emotions hurled toward me, like a gust of wind I didn’t expect. I was wholly unprepared to handle the gravity of birthing another human being. In the beginning, I struggled and there are days, even now, that I wonder if my decisions as a mother will impact her in meaningful ways.

Right now, though, I am trying so hard to focus on her half-birthday.

In many ways, she is so independent. In the morning, she asks the time to determine whether she wants to sleep in or if there is some urgency because she maybe running late to school or a playdate. She showers, brushes her teeth, showers and will yell, “I am ready, Momma.” I witnessed a small glimpse of her foray into adulthood when we visited the local bookstore. She said she had a question about a particular book she wanted and instead of asking me to accompany her to the information desk, she walked over and requested her book and followed the lady to the appropriate section. I watched this moment with my mouth wide open, knowing in that instant, she will need me less and less.

These are the years that ideas are forming in her head about so much: she abhors watching the news because she emphatically states, “Why do we have news? There is only bad stuff, like guns.” She enjoys telling jokes and making others laugh. Art always raises her curiosity and she’s managed to gain some entrepreneurial skills by hosting an art fair in our living room and tagging prices on her “works.” She thinks sorry always works, but also understands that sometimes sick people don’t get well with a band-aid, but leave the world forever. On any given day, she lists God as most important and understands that the world does not pop up on its own, but is connected to the divine in some way.

Right now, she is my best friend. When I have a tummy ache or headache, she is the first to run and grab some water for me. After a few hours, she will say, “Do you feel better Momma?” When I wear a particular dress for a night out, she will say, “That color looks so good one you.” Those kind of statements startle me because everyday we are entering the gate toward adolescence and leaving the world of milestones behind.

Right now,  she tries to climb on her father like a jungle-gym, but we realize as she grows, those days are certainly numbered. Their relationship revolves around his love of sports and  I often catch him trying to explain a basketball move or tennis swing. The other hallmark of their relationship is their abundant love for movies. I will head toward my office, while the two will sit on the couch and watch a movie like it’s a Broadway show in our living room. I suspect they will be movie buddies for life. It is the only time that she sits completely still and sometimes, both of them will be wiping a tear from their eyes over a sentimental scene.

Oh, my little girl is growing up. The passage of time hits like a punch in the gut. Even when you know it is coming, it does not dull the ache.

With tears in my eyes, Happy Eight and a Half Birthday. xoxo Momma

Welcome! I am a lawyer turned freelance writer, essayist, and editor. On staff at Literary Mama and the co-founder and co-editor of the literary journal, The Sunlight Press, my essays and reported work have appeared in The Washington Post, The Lily, Saveur, Civil Eats, Brain, Child, ESPN and elsewhere. I am currently at work on a memoir on grief and culture and how it provides perspective on life’s ordinary graces. I invite you to appreciate the ordinary with me. I hope my daily practice of seeing the magic in the mundane helps you celebrate and find more of these moments in your life too. END_OF_DOCUMENT_TOKEN_TO_BE_REPLACED