Do You Live In A Bubble? 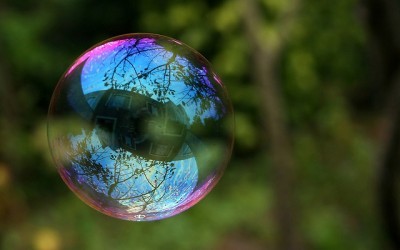 This past week my family traveled to Chicago. I never really know what to expect when I venture into a city that is wholly unfamiliar. In this space, I often muse about how much routine and predictability offer a cadence that I grip so tight I prevent myself from letting go. There is a comfort and certainty in staying in one place. It comes from a place where you internalize the curve of the road, the way one particular cactus shoots up in the sky, and the exact time when the sun will set behind the mountains.

What you know, I am learning, has two dimensions, comfort and ignorance.

On Saturday, we decided to catch a train out of the city. When we do travel, we always explore public transportation because it is usually accessible and almost always provides a very different perspective to the superficial layer of a city. As we settled into the blue bucket seats, I watched as a middle-aged woman pushed a grocery cart full of 5 garbage bags, some were transparent, while others were pitch black. As she boarded the train, she blocked the door with two of her bags and grabbed the cart with her other belongings and pushed herself next to the doors. The conductor made interrupted her reality by announcing that the doors would shut. She pushed her cart toward the pole and with one hand grabbed a red scarf to tie the car around the metal railing. Strapping her cart like a little baby, she sat down. Dressed in all black with a knit cap on her head, I kept glancing in her direction. The bag that protruded out into the aisle kept staring at me. I noticed that in it was tiny little other bags, aluminum foil, and various other papers. My mind wondered what her story was and what propelled her to seek comfort in collecting and transporting all these bags across the train stops. Did she have a home? Was she mentally ill? Did she suffer from OCD? These are questions that kept flashing off and on as we jostled in our places.

She eventually ventured off the train, making certain her companions followed. As she exited, a mother with three young children boarded. A little girl who looked the same age as my daughter sat across from her. Her outfit disheveled, her focus was on the orange popsicle that she licked. My head ping-ponged back and forth like a tennis ball from the little girl and to my daughter. There were so much about them that was the same. Both wore flip-flops, butterfly pins in their hair, smiled wide when the train moved more like a rollercoaster, and I heard both whisper the words “Momma” at least 3 times as we sat in our seats. I wondered where this little girl called home and how hard the mom had to work to keep up and support her children. I realize that there are many holes I am filling in with my observations that may or may not be true, but I know that somehow each my daughter and this little girl were probably not confronting the same roads.

These two intersections led me to pose this question: Do I live in a bubble? The obvious answer is yes. I think to a certain degree we all live in our own bubbles. What we do, where we live, who are friends are, where we travel or don’t travel, our judgments and perceptions keep us plugged into the familiar. Of what we know. And I think we forget that our reality is much different from many others. Intellectually I’ve always known this, but when you move outside of your own habitat and thrust yourself into someone else’s reality, you realize how solid your bubble becomes.

I know that I don’t do enough to venture out of my bubble. It involves risk. The older you get, the more comfortable you become in your own reality. And you forget that there are so many stories, so so many that are far different from your own.

I know that I am going to try harder to pierce through my own bubble.

Reflection In A Soap Bubble Via Flickr by Jim Trodel

Welcome! I am a lawyer turned freelance writer, essayist, and editor. On staff at Literary Mama and the co-founder and co-editor of the literary journal, The Sunlight Press, my essays and reported work have appeared in The Washington Post, The Lily, Saveur, Civil Eats, Brain, Child, ESPN and elsewhere. I am currently at work on a memoir on grief and culture and how it provides perspective on life’s ordinary graces. I invite you to appreciate the ordinary with me. I hope my daily practice of seeing the magic in the mundane helps you celebrate and find more of these moments in your life too. END_OF_DOCUMENT_TOKEN_TO_BE_REPLACED