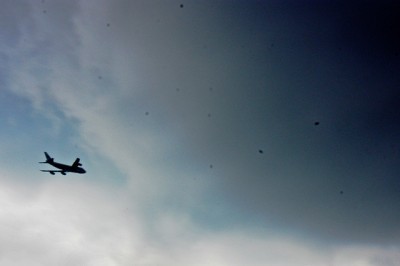 “It was a thirty foot cliff. And he dared me to the jump. I was nervous at first, but then this lean and lanky kid jumped. And without  hesitation, I jumped. Man, I just took the plunge and jumped.” The woman is sitting about five rows behind me in the airplane, but she has a megaphone voice and almost every person in a one mile vicinity can hear her private conversation.

This loud banter makes me nervous.

All I can think about is how the plane is swaying from one side to another. I see a man’s toupee slip a little, showing more of his bald head than, I assume, he probably likes. Behind me, the a flight attendant is collecting all the drink cups. When another passenger resists giving up her cocktail, in an even tone, the flight attendant says, “If you don’t give me that cup now, you will be wearing it.” The pilot’s voice hangs heavy over the intercom as he emphasizes “The seat belt sign is on. All persons should be wearing their seat belts. Flight attendants, please take your seats and buckle up. We will be hitting moderate amounts of turbulence as we approach Dallas.”

Fifteen minutes later, I relax again, taking a sip of my water as I pat the hair on my daughter’s head. From the moment the turbulence began, she laid in my lap. The sudden jerking and dropping did little to danger her sleep. My breath is now more even and the palms of my hands are dry again. In those several minutes of turbulence, it felt as if I held my breath for the tumultous duration. I paralyzed and locked myself in the fear.

The words I overheard earlier rang in my ear again. I believe we intersect with various words and people for a reason. I could easily dismiss that woman’s conversation as obnoxious or irrelevant or annoying. But in it was a truth for me, “I took the plunge. I just jumped.”

We all resist taking a plunge. Much of it for me is driven by fear. Fear of failure or fear of wasted effort or fear of. . . I think we all our guilty of it, whether it is a professional plunge or a relationship risk. We plague ourselves with the uncertainty and sometimes, as a result, we do nothing.

We just stand still. When all we need to do is jump.

Welcome! I am a lawyer turned freelance writer, essayist, and editor. On staff at Literary Mama and the co-founder and co-editor of the literary journal, The Sunlight Press, my essays and reported work have appeared in The Washington Post, The Lily, Saveur, Civil Eats, Brain, Child, ESPN and elsewhere. I am currently at work on a memoir on grief and culture and how it provides perspective on life’s ordinary graces. I invite you to appreciate the ordinary with me. I hope my daily practice of seeing the magic in the mundane helps you celebrate and find more of these moments in your life too. END_OF_DOCUMENT_TOKEN_TO_BE_REPLACED