Beauty and Death: A Matter of Perspective 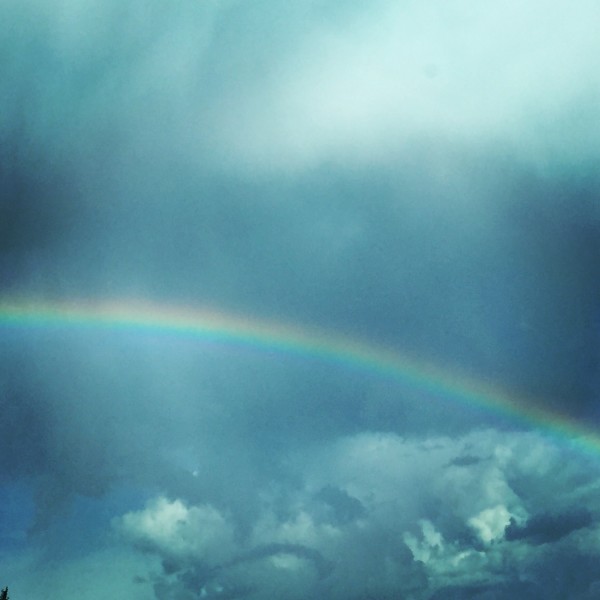 Last week, in between flashes of lightning and thunder, the rain announced its arrival with pounding pellets hitting the brown sand, while sliding across the skin of the cacti. In the desert, every single time the water falls from the sky it sings of a debut. The moment I hear the sounds of water and its chorus tapping the windows, it fades away like it’s intruding on the sun’s territory. It is a common occurrence for parts of the city to be illuminated by the sun and other places to be covered in a torrential downpour. The swing of this pendulum results in a brilliant arc of blending colors extending from the bottom of the valley behind the mountains. I always pause and gaze at the sky and try to take a photograph of what is happening around me. It is the easiest way to slip and acknowledge the present.

Later in the day I flipped through my camera feed and I showed my husband the snapshot of what I captured. My focus gazed toward the rainbow and I smiled. I leaned into wonder, like a child discovering a firefly at night. The moment I tried to put my phone away, my husband asked, “Do you see what is under the arc?” The image shocked me. I didn’t know what to make of it. Underneath the rainbow, the clouds collaborated together to form an unexpected design – an image of a skull laying at the curve of the colors. I looked again.

Death admiring the splendor of beauty.

A matter of perspective, perhaps.

So much is colored by the tilt of our outlook. During the same week, this lesson arrived in another unlikely place. I watched  my daughter play tennis during a competitive match. The father of her opponent sat down next to me and we exchanged small talk as we watched our respective son and daughter play. Most of the match we exchanged banter centered around the age of our children, how often they played tennis and traded information on various coaches. I looked ahead half-hearing the conversation and gazing at my daughter. Her long limbs moved as if she wasn’t responsible for what came next. It appeared the match wasn’t going in her favor. When the score card flipped, I glanced up and saw her score didn’t inch past 0.

We witnessed a few rallies and the father confessed he wished his wife could watch the match. When I asked why she couldn’t make it, he revealed his wife suffered from an aggressive form of breast cancer and the prognosis didn’t appear favorable. It proved too much to accompany their children to long tennis matches. As we talked further, he confessed his wife lit up when their kids brought home a trophy or medal from the tournament. “Tennis, he said, provides a good distraction. We stop thinking about her prognosis for a few minutes.” The heaviness of his words trickled into my veins. Again, perspective. In this second, whether my daughter lost this match seemed inconsequential. Moments before, I felt my own competitive edge surge and wondered why my daughter couldn’t muster enough points to secure at least one win. Now, though, I cheered for her opponent. The win for him meant joy for a mother I’ve never met.

Shifting my perspective pushed gratitude to the forefront. I contemplated the earlier image of the rainbow and the skull.

The fragility of all of it, so startling.

Welcome! I am a lawyer turned freelance writer, essayist, and editor. On staff at Literary Mama and the co-founder and co-editor of the literary journal, The Sunlight Press, my essays and reported work have appeared in The Washington Post, The Lily, Saveur, Civil Eats, Brain, Child, ESPN and elsewhere. I am currently at work on a memoir on grief and culture and how it provides perspective on life’s ordinary graces. I invite you to appreciate the ordinary with me. I hope my daily practice of seeing the magic in the mundane helps you celebrate and find more of these moments in your life too. END_OF_DOCUMENT_TOKEN_TO_BE_REPLACED