How Did It Get So Late So Soon? 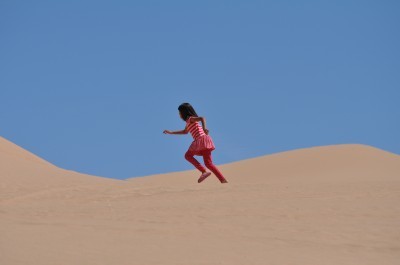 On a Saturday afternoon during my daughter’s Spring Break, we decided to explore the sand dunes between California and Arizona. We parked our car, she kicked open the door and raced toward the mounds of sand. I stood in the distance and witnessed her shuffling from one dune to another. I snapped this photograph of her darting ahead. Her feet sank as she moved forward. I watched as she maneuvered to gain momentum to take her next step.

I felt her same angst, trying to keep up, but the sand swallowed my flip-flops and my heart. My insides felt enveloped by the layer of complicated emotions that come with moving forward and of time passing as fast as a cannonball shooting out of its home. The path between the beginning and end happens so swiftly you are uncertain that you ever witnessed it.

That’s what I am feeling with my daughter in the middle of her eighth year. The refrain from Dr. Seuss rings in my head, “How did it get so late so soon?”

Unlike those days of young mothering, I am conscious of my daughter’s milestones. As a new mother, I failed to realize how those sleepless nights and frenzy-filled days transformed into this eight-year-old girl discovering her personal dazzle and having opinions, thoughts, and ideas of her own. I admit it is hard to digest. In two years, she will move into double digits. This thought lingers as I witness her various activities and thoughts. This week she performed in a play at school and although the music and dancing were upbeat, my eyes couldn’t help what my heart sensed.  I wiped tears as she smiled. When she asks questions, they delve into areas that require a more thoughtful answer. Earlier this month, she asked about metamorphosis and its meaning. The question surprised me. I have a young daughter asking about metamorphosis. And then the refrain happened again, “How did it get so late so soon?”

Yesterday I looked at a picture on our mantel. It is a picture of me holding my daughter at two weeks. I look younger, but tired. My eyes are focused on my little girl, but that new mother could not fathom how fast the trajectory of time moves. With that thought, my daughter sped by on her razor and circled the circumference of our living room. As she gravitated toward another part of the house, she said, “Look, Momma. Look, how fast I am going.”

I nodded and told her, “That’s awesome.” But inside, I said, “How did it get so late so soon?”

Welcome! I am a lawyer turned freelance writer, essayist, and editor. On staff at Literary Mama and the co-founder and co-editor of the literary journal, The Sunlight Press, my essays and reported work have appeared in The Washington Post, The Lily, Saveur, Civil Eats, Brain, Child, ESPN and elsewhere. I am currently at work on a memoir on grief and culture and how it provides perspective on life’s ordinary graces. I invite you to appreciate the ordinary with me. I hope my daily practice of seeing the magic in the mundane helps you celebrate and find more of these moments in your life too. END_OF_DOCUMENT_TOKEN_TO_BE_REPLACED