What You Learn When You Watch Your Child Lose 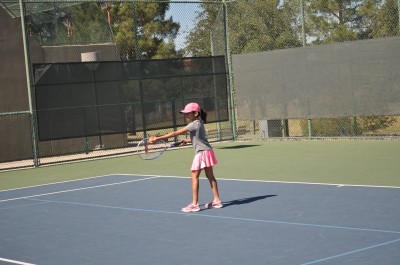 On Saturday, a variety of emotions scorched my heart.

My daughter played in her first tennis tournament. On the morning of her “big” day, we ate a family breakfast. She laughed as she picked at her eggs and kept asking if it was time to go play. Before we left, we told her we were proud of her and encouraged her to do her best.

On the drive to the tennis center, she sang while the radio played. I detected no nervousness on her part. As we approached  the building we sat in the chairs, she poked me on the shoulder and said, “Momma, my tummy is going up and down. I think I am nervous.” After taking her to the restroom, giving her a Starburst, and walking around, her nerves calmed. When her name was called, my husband and  I watched as she approached the coordinator, gathered her balls, and met her opponent.

As she walked over to the court, we accompanied her. She grabbed her racket and we wished her luck. Her opponent served first and as my daughter struggled with her return, I realized that this match was not going to go well. My little girl tried. She hustled back and forth and aimed her racket to manuever for a point, but for 30 minutes she could not rally enough to get the upper hand. At one point, when my daughter was down in the second set, 3 -0, she lost it and tennis-ball tears fell down her face. She experienced losing for the first time. And I witnessed it, over and over again, point after point.

I wanted to run to the middle of court and scream,”Hey, take it easy, she’s only 7 and it is her first tournament!” But this was a transient and momentary thought. In the “real” world, as a mother I can only stand and witness. The anguish on her face was apparent, but I kept encouraging her to move forward and to keep playing. Part of me wanted to say, “Enough!”, but it was important for her to continue even if the result meant she was eventually going to lose. At the end of the match, she walked over to her opponent, shook her hand, and said “Thank You.”  We praised our daughter for finishing the match, but also realized how much more preparation she needed in order to compete.

On the way home, she confessed, that she felt “beaten down” by her opponent and even composed a song on the recorder titled “The Beat Down Song.” We all laughed with her as she tried to make light of her loss. She knew she lost, but was able to see the light. As she giggled while playing her song, I thought about everything my daughter taught me in a few hours on a Saturday afternoon.

I cannot protect her forever.

She will lose and fall. But she will get up and try again.

Resilience is an undervalued quality.

The process is far more important than the outcome.

And, again, the lesson that keeps repeating itself like a mantra, we all must let go.

Welcome! I am a lawyer turned freelance writer, essayist, and editor. On staff at Literary Mama and the co-founder and co-editor of the literary journal, The Sunlight Press, my essays and reported work have appeared in The Washington Post, The Lily, Saveur, Civil Eats, Brain, Child, ESPN and elsewhere. I am currently at work on a memoir on grief and culture and how it provides perspective on life’s ordinary graces. I invite you to appreciate the ordinary with me. I hope my daily practice of seeing the magic in the mundane helps you celebrate and find more of these moments in your life too. END_OF_DOCUMENT_TOKEN_TO_BE_REPLACED