The Shimmer Of Seven & A Half 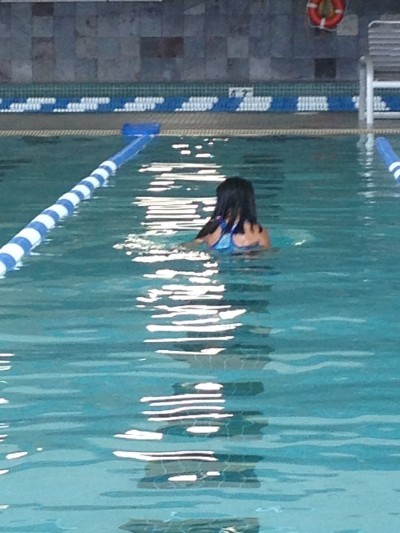 On July 9, my daughter will celebrate another half-birthday. Seven and a half. I captured this picture of her swimming in the water this past Friday. What I notice is how the water reflects, shines, and captures all the pizzaz surrounding her world of wonder. What does seven and a half mean? So many things.

Seven and half means asking questions. Lots of them. Everything from “Does everyone have a grandma?” to “How did I get made?”

Seven and half means experimenting with crafts. Aluminum foil, scissors, glue, crayons, and lots of paper are the treasures that represent a day in the life of a busy artist.

Seven and half means singing. I will catch her singing anything from Taylor Swift to Mumford & Sons while the water runs in the shower.

Seven and half means still believing in the power of magic. The tooth fairy, Santa, and leprechaun’s still exist. Although she occasionally asks “Are there really such things, Momma?” I know she holds out hope that they are part of the real world.

Seven and half means saying inappropriate things because she doesn’t know. A few days ago we walked into a store and the saleslady had an unconventional haircut. She immediately said, “Momma, her hair is funny.” I scolded her and told her that statement might hurt the lady’s feelings. My daughter responded, “I meant it in a nice way, not a mean way.”

Seven and half means getting excited about a store full of candy. She picks out gummy worms and Sour Patch Kids and stuffs them into a bag until I say, “Enough.”

Seven and half means hundreds of hugs, kisses, and random “I love you’s” throughout the day.

Seven and half means folding laundry, helping with groceries, and asking if there are more chores to complete.

Seven and half means discovering new words in books and asking what they mean.

Seven and half means dancing. I get to witness eighties dance moves all over again. Watching my daughter do the snake guarantees an automatic laugh out of me.

Seven and half means, “Look, Momma. Watch me!”

Seven and half means realizing this, “I like myself. You know why, Momma? Because God made me.”

Seven and half means love, wonder, and innocence.

Welcome! I am a lawyer turned freelance writer, essayist, and editor. On staff at Literary Mama and the co-founder and co-editor of the literary journal, The Sunlight Press, my essays and reported work have appeared in The Washington Post, The Lily, Saveur, Civil Eats, Brain, Child, ESPN and elsewhere. I am currently at work on a memoir on grief and culture and how it provides perspective on life’s ordinary graces. I invite you to appreciate the ordinary with me. I hope my daily practice of seeing the magic in the mundane helps you celebrate and find more of these moments in your life too. END_OF_DOCUMENT_TOKEN_TO_BE_REPLACED