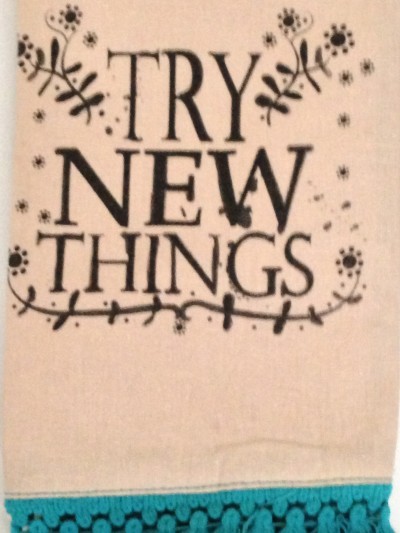 It is no secret. I love routine. My morning run, coffee, and writing time are staples of my day. If for some reason I miss out on these daily rituals, I feel incomplete. This is my quiet time, something I crave more and more as I get older. As much as solitude provides comfort, I also realize that it is essential to move out of my own box and try new things.

The idea of trying new things appeals to me, but it also inhabits a place of fear. I am a creature of certainty and guarantees. Attempting to venture in unchartered territory often raises my anxiety. But I also know that I need to move out of my comfort box and push myself to experiment. This past week I tried two different activities. Over the weekend, with some friends, we rode bicycles around the city. Although I rode bikes as a kid, more than twenty years had passed since I climbed on a small seat and maneuvered a piece of metal. The first few minutes were reckless and humorous. I bobbled around, but after a few minutes, the bike ride felt smooth and liberating.

I continued my “adventurous” streak and decided to play a game of soccer a couple of days ago. I sprinted around the field and attempted to kick the ball. As a young girl, I never participated in organized sports. It was the first time in my life that I played on a team. It was interesting how much I enjoyed trying something I never envisioned doing. On the drive home, I reflected on my soccer excursion. It hit me that I never attempted team sports in high school because of fear. And why? The typical reasons popped up in my head. Even before trying, I convinced myself that I would not be good enough, people might laugh, and I would embarrass myself.

These reasons seem silly, but they still creep up. What am I trying to prove? For some reason those reservations seem absurd.

Try new things. I learned how much I loved moving outside of my routine.

Welcome! I am a lawyer turned freelance writer, essayist, and editor. On staff at Literary Mama and the co-founder and co-editor of the literary journal, The Sunlight Press, my essays and reported work have appeared in The Washington Post, The Lily, Saveur, Civil Eats, Brain, Child, ESPN and elsewhere. I am currently at work on a memoir on grief and culture and how it provides perspective on life’s ordinary graces. I invite you to appreciate the ordinary with me. I hope my daily practice of seeing the magic in the mundane helps you celebrate and find more of these moments in your life too. END_OF_DOCUMENT_TOKEN_TO_BE_REPLACED