What Your Name Carries 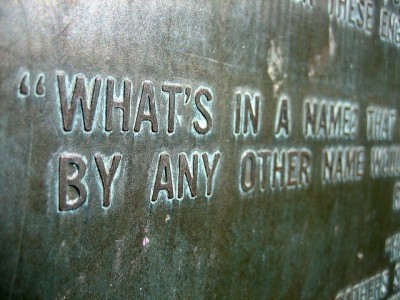 “Names have power.”   – Rick Riordan, The Lightning Thief
Living in Texas, the name Rudri received much attention. In grade school, many of my teachers couldn’t pronounce my name. There would always be some unique pronunciation of my name, like Roo-Dry or some similar variation. A teacher would attempt to enunciate my name at least three of four solid times before he or she eventually gave up in trying to say it correctly. Every year as I graduated from one grade to the next, the same cycle would repeat.
Much of middle school, a few classmates thought it was funny to tease me. Some kicked my chair in class and said, “Hey Roto-Rooter or Rude or Roach.” When The Cosby Show became a popular, often people would confuse me with the Rudy Huxtable. People thought calling me Rudy was funny. I wasn’t really laughing.
Every name has a story. Your identity is woven into your name. My name was twelve years in the making. My parents had trouble conceiving after they got married. After years of trying unsuccessfully, they looked to adoption. My mom, in hopes of giving birth, prayed to the Hindu deity Surya, which is a manifestation of the sun. For years, she devoted herself to a special puja (Indian religious ritual) in order to conceive. Two years after my parents immigrated to Texas, I was born. And the name Rudri was born. It’s a story that I didn’t appreciate until I was much older. Many times, growing up, part of me wanted to blend in. I became a little irritated in having such an unusual name. It was easier to have a name that rolled off the tongue without effort.
But as I ingest my history and know how I came to be and how every letter may signify not only your history, but how your ancestors wove a part of them in your name. So these days, when I meet someone for the first time, I introduce myself as Rudri, not with hesitation, but a proud silence, embracing all those who came before me. That is the true power of my name.
Image by Jack Dorsey

Welcome! I am a lawyer turned freelance writer, essayist, and editor. On staff at Literary Mama and the co-founder and co-editor of the literary journal, The Sunlight Press, my essays and reported work have appeared in The Washington Post, The Lily, Saveur, Civil Eats, Brain, Child, ESPN and elsewhere. I am currently at work on a memoir on grief and culture and how it provides perspective on life’s ordinary graces. I invite you to appreciate the ordinary with me. I hope my daily practice of seeing the magic in the mundane helps you celebrate and find more of these moments in your life too. END_OF_DOCUMENT_TOKEN_TO_BE_REPLACED