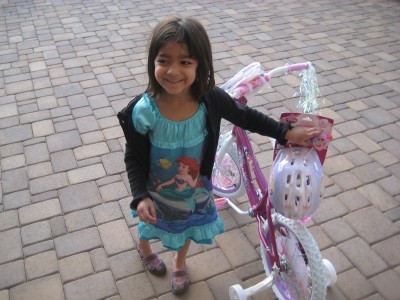 The pink and white princess bike sits against the grey backdrop in the garage. The air looks low in the front tire and the pretty streamers from the bike handles have withered away. Two days ago, my daughter finally took notice of her bike, one that she’s had since she was 4. She asked, “Momma, can we go bike riding?” My answer spilled without hesitation. “No, not today. Maybe later.” I was surprised by her question.

Her relationship with her bike is ambivalent.

Her aunt surprised her with this bike on her fourth birthday and she squealed with excitement. With training wheels, she steered her bike like a Roman chariot. Confidence maneuvered the pedals and she enjoyed riding around the neighborhood. When it came time to take the wheels off, she hesitated. We convinced her it would require practice, but eventually she could conquer two wheels instead of four. What my husband and I didn’t expect was the tumult that would result from her attempting to master bike riding. Tears, tantrums, and a constant barrage of “I can’t do this. I am tired,” led to her giving up biking. She told us, “I like to run. How about I run around the neighborhood?” My husband and I decided that she would let us know when she wanted to try again.

Yesterday she asked again about bike riding. Her tone demanded my attention. We took her bike out and practiced on the grass. She fell a few times, but there were no tears or mind-numbing tantrums. Instead, she picked herself up, straightened out her wheels, and pedaled faster with purpose. By the end of the evening, my husband and I watched her ride her bike on her own down the street.

I stayed back and watched my little girl ride her bike for the very first time. It filled me up, while looking at the blue and azure sky. She’s growing up, transforming everyday into a very independent girl. With tears in my eyes, my mind intersected with Joan Didion’s line from her most recent book, Blue Nights, “When we talk about mortality, we are talking about our children.” At that very instant, watching my daughter, I understood.

Welcome! I am a lawyer turned freelance writer, essayist, and editor. On staff at Literary Mama and the co-founder and co-editor of the literary journal, The Sunlight Press, my essays and reported work have appeared in The Washington Post, The Lily, Saveur, Civil Eats, Brain, Child, ESPN and elsewhere. I am currently at work on a memoir on grief and culture and how it provides perspective on life’s ordinary graces. I invite you to appreciate the ordinary with me. I hope my daily practice of seeing the magic in the mundane helps you celebrate and find more of these moments in your life too. END_OF_DOCUMENT_TOKEN_TO_BE_REPLACED