Not Just A Bollywood Dance 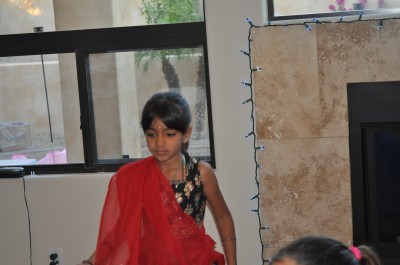 My daughter is Indian. I forget this sometimes.

But what is that reason? And why I can’t I explain it to my daughter? I tell her she is Indian, but my every word and action betrays that truth. We celebrate Christmas more than Diwali. My daughter isn’t aware of the vast array of colors of rangoli or the sweets exchanged from house to house or that Diwali commemorates the return of Ram, Sita and Laxma from their fourteen year exile. But she celebrates Easter by coloring eggs and participating in Easter Egg hunts, but is unfamiliar with garba, one of the most popular staples of Indian dance.

The chasm between our born identity and the culture we choose to adopt announces itself in the most unsuspecting moments.

Last week for dress rehearsal for her Bollywood dance performance, I put on my daughter’s chaniya choli, a traditional skirt and blouse combo that is worn in India.  We decide to grab breakfast right before. As she exited the car, there was a moment of hesitation. I tell her,  “Hurry up. We are running late.” With one leg out of the car door and the other planted firmly inside, she said, “Momma, people are going to think I am weird because I am wearing this.” I tell her she is not weird. That the chaniya choli is fine and no one will say anything to her.

Her “I am weird comment” lingers with me. But at dress rehearsal, I watched how she mouths the words, “Bole Chudiya, Bole Kangana” and smiles. She extends her hands long and her fingers twirl and bend to the rhythm of  of Indian instruments. The weirdness evaporates as she holds the hands of the other girls and they all move around in a circle.

As parents we witness the see-saw between assimilation and abandonment. There is a sense of being an in-between, where you are considered a non-resident Indian when you visit the place of your heritage, while in the country of your birthplace, you are an American with an asterick. There isn’t a place of absolute comfort, a tug of war between two opposite points. What do we want to convey to our children about their history?

For me, her Bollywood dance recital is more than about girls performing an Indian dance. It’s about learning Hindi, wearing lenghas and chudis, and eating Indian cuisine. It’s acknowledging a part of their history.

I look at my daughter. My mind yields. And I believe again.

She is Indian. I just needed a reminder.

Welcome! I am a lawyer turned freelance writer, essayist, and editor. On staff at Literary Mama and the co-founder and co-editor of the literary journal, The Sunlight Press, my essays and reported work have appeared in The Washington Post, The Lily, Saveur, Civil Eats, Brain, Child, ESPN and elsewhere. I am currently at work on a memoir on grief and culture and how it provides perspective on life’s ordinary graces. I invite you to appreciate the ordinary with me. I hope my daily practice of seeing the magic in the mundane helps you celebrate and find more of these moments in your life too. END_OF_DOCUMENT_TOKEN_TO_BE_REPLACED